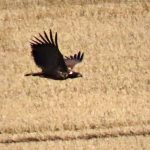 A number of white-tailed eagles were released on the Isle of Wight in August 2020 (having been born in Scotland) as part of a reintroduction program under license from Natural England. We received an exciting report that one of these white-tailed eagles had roosted overnight in woods at Upper Froyle during the first week of October 2020. 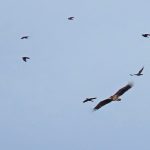 The next morning Keith Betton (Hampshire County Bird Recorder) took photos of it being mobbed by crows before it flew to a wood in Lower Froyle. Its GPS tracker showed that later it had flown towards London, before returning to the Isle of Wight via Sussex.

The reintroduction program only takes a chick when there are two in the nest – because usually one dies in that situation.