Lockdown in sunny weather has had its benefits; it was a great spring for bluebells and exploring the local countryside as everything dried out. Keen eyes will have spotted lots of insects flitting about the hedgerows and if you head out at dusk you will see the bats taking full advantage! Other insectivores made an early appearance this year – the swifts can now be heard shrieking over the roof tops, arriving about a week earlier than usual, although numbers so far look slightly down on last year. Swallows and Martins have returned and now it is starting to feel like a proper summer! 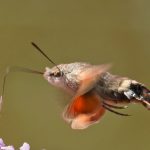 Walking through the field footpaths you can spot the solitary mining bees darting in and out of surprisingly small holes. Ashy mining bees are colonial and have been spotted in Upper Froyle, as has a very beautiful hummingbird hawk moth. These large moths don’t land when they feed, using their long proboscis instead, are also migratory, but since this one appeared in late April it must have over wintered here.

By mid-May, most of the native species of bird are fledging their first brood, and with almost no cold and wet weather it could be a good year for them. From my dog walks there seem to be more partridge this year and hares seem to be on the up, but stoats have also been seen, let’s hope leverets don’t get hypnotised as easily as rabbits!

Find us on our new Instagram page: @froylewildlife and share your wildlife photos using #froylewildlife. To see what bird species have been recorded in Froyle, click on the .pdf. Other wildlife lists recorded in this Parish are available here.