Join us at Farnham Heath on Saturday 21st May for a 2h guided walk by RSPB reserves warden Mike Coates. Centuries ago heathland developed from Common Land that was used for grazing and digging turfs. It is now a rare habitat, Surrey having lost 90% of its heathland. 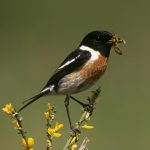 In 2004, an area of conifer forest was cleared in sections over 10 years. The heather seeds, which had laid dormant for decades, sprung to life and this attracted a number of rare birds including nightjars, woodlarks, and Dartford warblers; reptiles including endangered sand lizards; and invertebrates including field crickets and silver studded blues.
Froyle Wildlife members Meet 10.30am at Tilford Rural Life Centre car park Reeds Road, GU10 2DL.