Skip to content
HomeThe Holly and the Ivy, December 2021

The Holly and the Ivy are words of this traditional Christmas carol, thought to have Pagan origins and could date back over 1000 years. Holly (Ilex aquifolium) and Ivy (Hedera helix) were taken indoors during the winter, the hope being that the occupants would endure the cold season just as these hardy plants do.  In addition, they are both brilliant for wildlife, their flowers benefit pollinators and their berries are eaten by birds.

Stroll past any ivy clad wall or tree on a sunny day in late summer and early autumn and you will see a myriad of bees, flies, wasps and 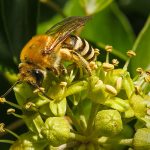 butterflies attracted to the rich nectar and pollen offering. A study by Sussex University demonstrated how significant ivy’s presence is to insects. During September and October they showed that the majority of pollen pellets collected by honey bees were from ivy. Hoverflies were also observed to be particularly frequent visitors. Ivy even has its own specialists, including the Ivy Bee (Colletes hedera). 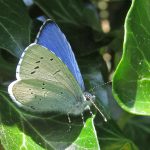 emerging well before other blue butterflies. It tends to fly high around bushes and trees, whereas other grassland blues usually stay near ground level.  It is by far the commonest blue butterfly to found in gardens with a second generation flying July to September.  The larvae feed predominantly on the flower buds, berries and terminal leaves of Holly in the spring generation, and on Ivy in the summer generation.

Although holly berries are often ripe by autumn, birds such as song thrushes, blackbirds, fieldfares and redwings 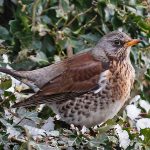 don’t usually feed on them until late winter. The dry pith of ivy berries contains nearly as many calories, weight for weight as Mars bars! In most cases, while the bird digests the pith and juice, the seeds travel undamaged through the bird’s gut, and may be dropped many miles from the parent plant.