Enjoying the Wildlife of Froyle

We have lived in Froyle now for nearly 12 years, relatively new residents compared to many, but every day I am appreciative of how lucky we are to live here, with the countryside and wildlife on our doorstep. This was highlighted on a recent two mile dog walk around Lower Froyle.

It was a gloriously sunny morning. We left our resident house martins behind in the nests around our house. After their long journey back from Africa we are hoping they will be successfully breeding, to help keep up, and perhaps swell, their ‘amber listed’ population. Shortly afterwards we encountered a Red Kite, another ‘amber listed’ bird, magnificently gliding low over the houses and gardens. ‘Amber list’ includes species where there is falling populations or contracting ranges.

Whilst walking close to the quarry, Skylarks were in songflight, some so high in the air that they were barely visible. This is a relatively common occurrence here, but not typical generally for the UK now as Skylarks are on the ‘red list’ of endangered or vulnerable species. In the hedgerow we heard the ‘little bit of bread and no cheese’ song of a Yellow Hammer, another species on the red list.

A Roe deer doe was standing in the shade of a tree at the edge of a field behind long grass. Luckily the wind must have been in its favour as the dogs were unaware of it. It remained there just watching us, perhaps it had a kid nearby.

As usual we stopped to admire the view from the thoughtfully placed ‘tree bench’ at the top of Hussey’s Lane. On returning down the lane, a Grass Snake slithered back into the vegetation at the edge of the track, having been disturbed from basking in the sun by our footsteps. A Blackcap sang its melodic song further down the track. 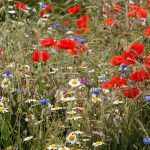 Coming across the Recreation Field, we admired the blooms of the ‘Wildflower area’. Once back in our garden, the hedgehog droppings were evidence of a visitor or two the night before, presumably consuming the food that we put out for them each evening.

Whilst I appreciate this is by no means an exhaustive list of Froyle wildlife, I feel very fortunate to be able to experience the sorts of encounters mentioned above.